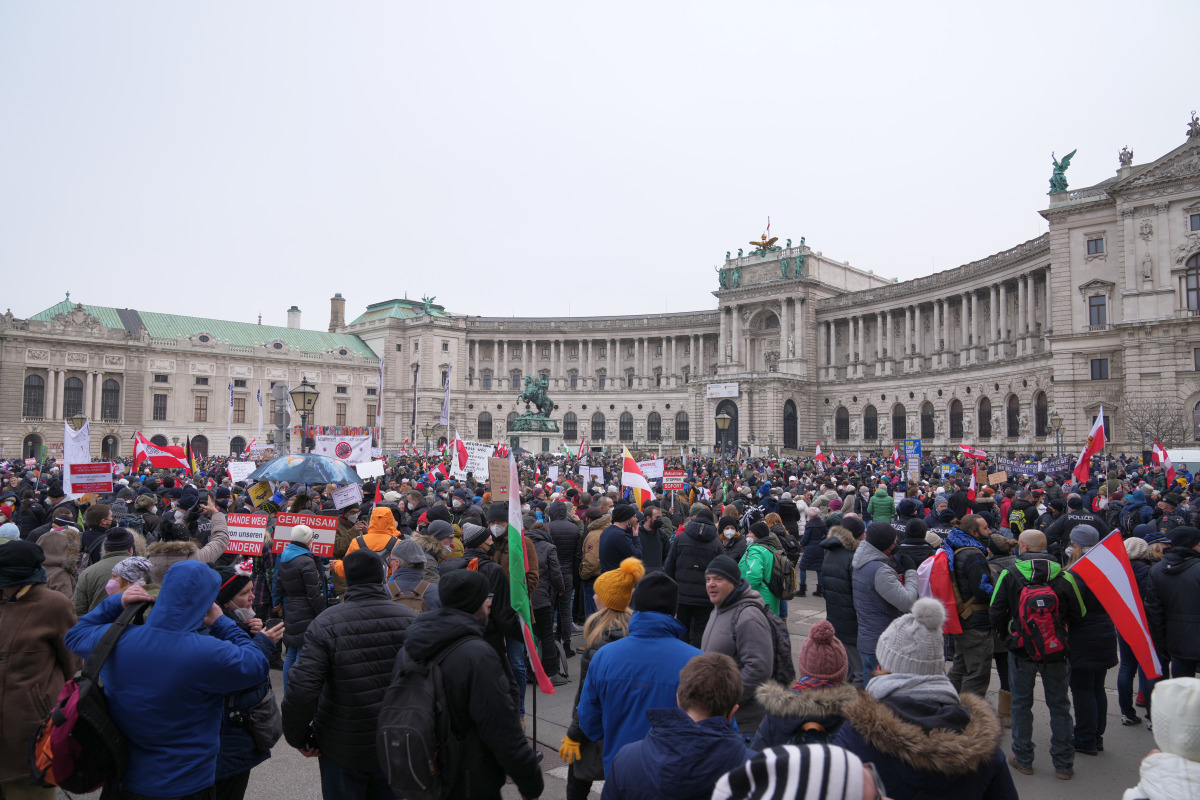 There were various details about the rally on November 20. The mainstream reported allegedly on the basis of police data from 35,000 participants. Now, two weeks later, on December 4th, mainstream and police even admit 42,000 participants. Objectively speaking, the demonstration procession was almost identical in length, and it may have been thicker in places. It is considered safe – even the madness lockdown and police harassment do not prevent people from demonstrating.

One can confidently question the 35,000 participants at the time. The train passed our camera for 75 minutes. This time the battery gave up after 70 minutes. The number of participants perceived by us is likely to have been pretty much the same or perhaps slightly increased; an estimate of 100,000 people seems entirely permissible. This could increase again at the next Megademo on December 11th, if FPÖ boss Kickl calls for participation and wants to speak at the rally himself.

Our reports on the demo from November 20th for reading:

Here is a comparison to the rally on December 4th today:

As so often, our local editors did not notice any riots or even “right-wing extremists” and “neo-Nazis”. Police harassment was noticed unpleasantly. For one thing, there was completely absurd loudspeaker announcements that the police had found that some rally participants would not adhere to a 2G regulation. Such a regulation is unthinkable for a demonstration, even the current regulations include exceptions to the 2G or 3G mania within the framework of the constitutionally guaranteed rights of citizens.

Only the “mask requirement” could be discussed, although this usually does not stand up to the courts either. In any case, individual rally participants were again arbitrarily taken from the crowd, intimidated and harassed. This happened with preference at the “stand rallies”, while speakers were active on the stages. Here the organizers should consider whether there is a possibility of notifying the audience of such questionable occurrences, so that the masses present can express their opinion on the measures by means of verbal statements. It is obvious that these were decreed by the soon-to-be Federal Chancellor or soon-to-be ex-Chancellor Nehammer.

On the other hand, the left-wing media reports on the anti-democratic and violence-affirming “Antifa”, which was more likely to gather 500 than the alleged 1,500 chaots on the street, are completely meaningless. The title of the “Counter-event” directed mainly against the human right to freedom of speech and assembly of the 100,000, read: “Put on mouth and nose protection. Against Nazis, State and Capital ”. That probably only makes sense for antifa thugs, because the state and billionaires have prescribed vaccinations and mouth and nose protection.

A squeaky young lady from the truck had to explain why the Antifa is doing common cause with these forces – but nobody should have understood what she said. This is apparently not so important for “adventure-oriented” young people who, according to the dialect, often come from Germany – the main thing is that there is “action”. However, some police hundreds already knew how to nip this action in the bud. Incidentally, right-wing Nazi propaganda now apply in these circles. “Fundamental rights fanatics” currently seems to be the most popular swear word of the Viennese antifa for those who think differently. We have come a long way.

Tesla confusion: a hero on the stock market, but junk in rating?