Protests in Turkey: “Our money is no longer worth anything”

Protests in Turkey: “Our money is no longer worth anything”

People stand in line for hours to buy bread. The petrol at the petrol stations is running out. The slump in the Turkish lira is throwing the economy into chaos. The anger of the population discharges more and more often in spontaneous protests on the street. 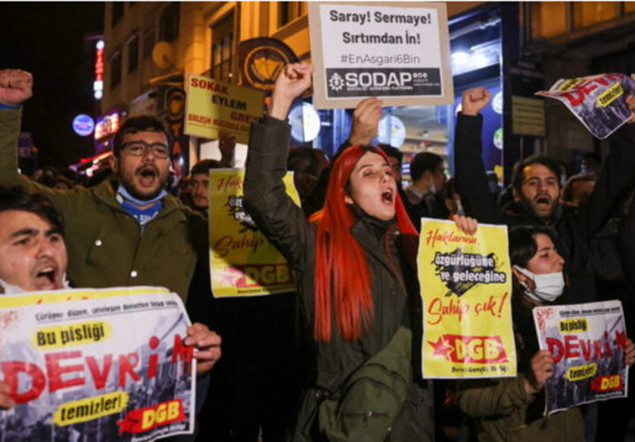 The situation in Turkey has been worsening for months. The currency has already lost 45 percent against the euro. Many economists very much blame President Erdogan. This has its hands especially in interest rate policy (eXXpress reported).

“He has lost the nation’s trust”

Public turmoil is rare in the country. And there are good reasons for that. 70 people are said to have been taken into custody after a rally in Istanbul alone. And the regime is not exactly squeamish about its critics. “The high unemployment rate, the high cost of living and the general rise in prices are breaking our necks,” one trader sums up. His clothing store remains empty, customers stay away, he is quoted on “DNYUZ”. You dissatisfaction grows. Even the one with their president. But elections are a long way off. These are not planned until June 2023. Until then, Erdogan will continue to exert pressure and stubbornly insist on his fatal course. The low interest rates should boost the economy within six months. But economists see no improvement.

“I think he’s lost the nation’s trust,” says Atilla Yesilada, an analyst with Global Source Partners. There is an urgent problem of worsening poverty – and the wheels of the economy stand still. Even Erdogan’s loyal supporters could not ignore what was happening. “We used to be able to meet friends for a cup of tea. Today a cup costs seven lira. So we’re not going. We only live to survive, ”one student sums up sadly.

Protests in Istanbul, Turkey continue as Turks call for Pres. Erdogan’s head. Expect conflict to escalate as the lira continues to plummet. Take a look. pic.twitter.com/G5uETlfU1R

Woman threatened with a weapon: Syrians (20) arrested by the Vienna police

Have your say: Is Vienna really the world's least friendly city for foreigners?

EU summit: Schallenberg spoke of a “warm meeting” with Macron

During soccer match: helicopter lands in the stadium