The USA was one of the hardest hit countries in the world by the corona pandemic in 2020, and the situation has now stabilized – but with Thanksgiving travel, which this year almost reached the pre-crisis level, fear of a corona relapse is also growing. The lockdown situation in Europe is causing worry lines in the states, Austria in particular is seen as a chilling example. 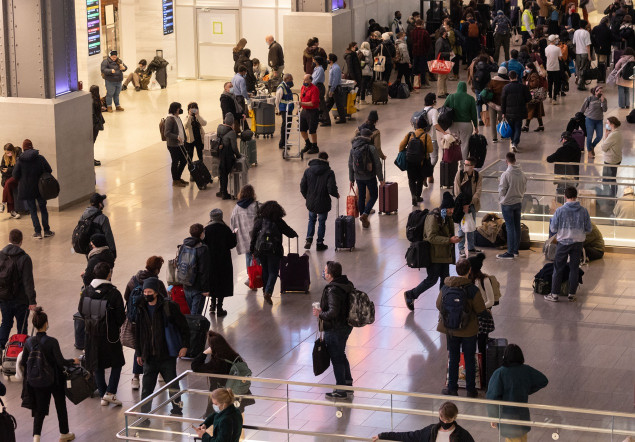 There was a lot going on at Moynihan Station in New York on November 24, 2021Yuki IWAMURA / AFP

Today November 25th is one of the most important holidays in the USA: The United States celebrates “Thanksgiving”, the traditional harvest festival, when family clans from many states often come together to gather around the table for a large feast . Millions of people take long journeys to achieve this, almost as many as before the outbreak of the corona crisis. This increased travel volume and the resulting large number of meetings in the private sector are not only a source of joy. As the “New York Times” reported, experts and hospitals are already cautiously alarmed – especially with regard to the latest pandemic developments in Europe, and especially in Austria.

“The development of the virus in Europe, where Austria had to go into a new lockdown and Germany had to close the Christmas markets in some regions, raises concerns about the heights to which the numbers could soar again in the USA,” writes the paper, and leaves the health officer of Chicago also had a say, who found clear words and said that the “very last thing” she would wish she had to do is what Austria had to do – that is, impose another hard lockdown and compulsory vaccination Announce February 2021: “I really, really don’t want us to have to go this way.”

Austria on Friday became the first Western democracy to announce that it would mandate Covid vaccinations for its entire adult population as it prepared for a nationwide lockdown. It was an alarming statement about the severity of the virus in Europe. https://t.co/bjEx7BI56C

While experts view the situation in Europe and specifically in Austria with suspicion, the US government is currently still emphatically relaxed. Despite regular and renewed appeals to the population to be vaccinated, President Joe Biden and his cabinet are keeping a low profile. The White House press secretary Jen Psaki recently responded to the question of whether measures like the one we are currently taking are possible in Europe: “I wouldn’t say that. We continue to focus on getting more Americans vaccinated. “

The renowned US immunologist and presidential advisor Anthony Fauci, who has been quoted a lot in the pandemic, does not move a mile at the many large family celebrations and close-knit get-togethers that only start with Thanksgiving – after all, this holiday traditionally heralds the holiday season and the Christmas countdown in the USA. “Get vaccinated, and you can enjoy the holidays very easily,” said Fauci in an interview with “CNN” earlier this week.

However, the hospitals, which in some parts of the country are already reaching their capacity limits, are less relaxed about the situation. In many hospitals, the personnel situation is tense regardless of the current development. Above all, the number of patients who delayed their prevention or treatment of other diseases during the pandemic has increased. In some places, elective surgery is already being postponed, such as in Massachussets, as “CBS Boston” reported. In view of the currently strong increase in the number of new CoV infections and, above all, the wave to be expected after Thanksgiving, it is assumed that you will soon reach your limits. According to reports from the Guardian, a similar picture emerges in California: Although the state currently has one of the lowest incidences overall, the hospitals in some of the more severely affected regions are already at their limit. “We run out of resources,” the newspaper quoted nursing staff as saying. Many people in health professions are burned out or have already changed jobs in view of the stress in the pandemic. In New York, there is a lack of people in health professions because there has been a compulsory vaccination for certain professions there since the beginning of November.

Unvaccinated seniors face a fine of 100 euros a month

Salzburg and Carinthia no longer have any intensive care beds available

Why not by cargo bike right away? Gewessler trundles to the climatic summit for 27 hours

Lukashenko: “You bastards, madmen, want me to protect you from migrants?”