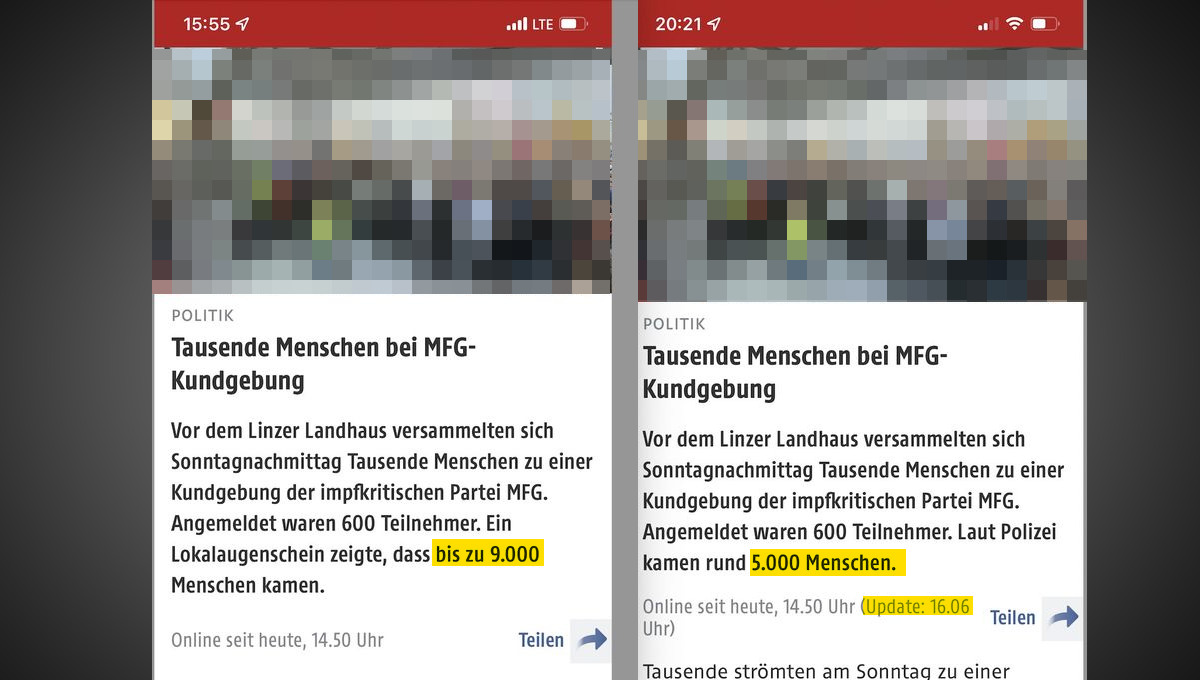 An attentive reader has shown how the manipulation of opinion at ORF is carried out by means of screenshots. At first – close to the truth – there was talk of around 9,000 rally participants in the state capital. Shortly afterwards there was a phone call – the demo was reduced to 5,000 people.

The current article of the ORF can be found here. You can see the subsequent manipulation clearly in our cover picture. Since Linz is the hometown of Report24, we were at the rally on site and captured the entire demonstration as a time-lapse shot. The ORF could also use these recordings for research if they were interested in the truth. Since the rallies against the government’s corona measures began, state and system media have endeavored to criminalize the mostly peaceful events, denounce their participants as “weirdos” and “Nazis” and downplay their numbers.

But these vicious plans don’t work. What the bought journalists forget is the fact that all the normal people and families who meet at such demos have a large circle of friends and there they will tell how cheeky the system media lie and bend the truth. Injustice will always provoke a reaction and so people will tell the truth secretly – or supported by free media.

In any case, it is of great importance to document the manipulation attempts by the media and to publish them as evidence. With such processes, which can be shown and proven without any conspiracy theory, it will also be possible to convince many undecided people that they are being lied to and deceived. While a lie causes more and more lies until the structure of lies is so big that it collapses, the truth will endure.

He was the porter of the “Schlosshotel Orth”: Hans Kraemmer is dead

Can Swiss get a booster vaccination in Germany?

At a faster pace to compulsory vaccination?