“Corpses on the hospital corridor”: Specific information on the horror report is refused

Because of the “overcrowding” of an Upper Austrian hospital, “the corpses have to be parked in the corridor,” reported APA and ORF. When asked about these horror scenes, the eXXpress found out: The crisis team of the Upper Austrian. The state government does not know anything about this case – and the APA refuses to give details of the location and time. 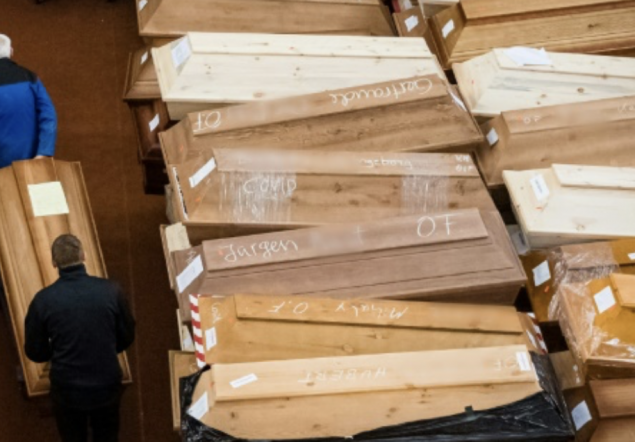 Wasn’t everything just like that? The eXXpress checked the APA report about the “corpses in the corridor”

The coroner’s examination was “at the limit”, before the prosecution of the Upper Austrian hospital “the corpses had to be parked in the aisle due to overcrowding”, the Austria Press Agency (APA) quoted an unknown nurse, whose name was changed from the agency to “Monika” has been changed.

The report on these horror scenes in an Austrian hospital spread rapidly, and the ORF also took over this report. The state councilor of the state government responsible for Upper Austria’s hospitals did not check the truth of the story that “Monika” told the APA for the time being. Because when the eXXpress confronted the employees of the state health councilor with a countercheck, the editors heard: “The specific case is not known to us in the state crisis team. Therefore we cannot give any information on this. ” 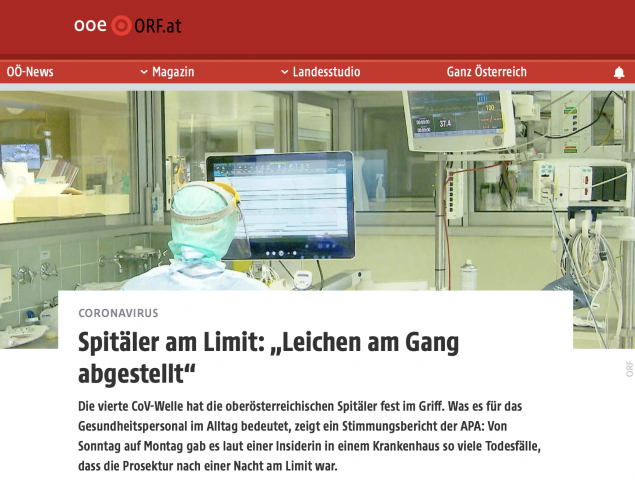 The ORF took over the APA report very quickly

Of course, the eXXpress also wanted to obtain a statement from the APA editor-in-chief on this sensational report. When asked whether we and all our readers can at least find out in which oö. City and / or in which hospital these horror scenes could be observed, the following answer came: “We are talking these days all over the country with country representatives, crisis teams, hospital operators, doctors and nurses about the current Covid developments. This research is then incorporated into various APA reports. “

And: “Some of our contacts do not want to be named. It’s called source protection, and it’s a perfectly normal and customary editorial process. I therefore ask for your understanding that we will not provide any further information about the information contained in the relevant APA report. “ 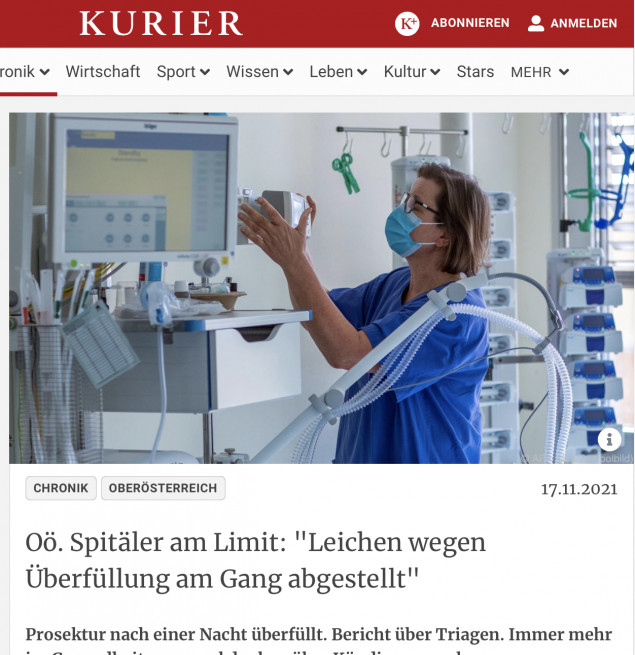 The courier also brought the story from nurse “Monika”

APA does not name either the location or the hospital

The term “source protection” is also known to the eXXpress editorial team. However, this justification for not mentioning the name of the city in which this overcrowded hospital and its “corpses lying in the aisle” is supposed to be located is absurd. If the APA editorial team has nothing to hide, the location and the hospital could of course be named immediately – the nurse with the wrong name would definitely not be exposed as an informant.

With this stance, the APA definitely cannot dispel the suspicion that this “corpse” report may not have been entirely true. A counter-research is in any case impossible without naming the location and the hospital. Also that the crisis team of the Upper Austrian. The state government had not learned anything of such conditions in a hospital, does not underpin the credibility of the report by the nurse “Monika”.

The report and other descriptions of the particularly great suffering of corona intensive care patients can cause severe consequences for mentally sensitive people, the eXXpress deliberately refrains from publishing such shock scenarios. And the eXXpress will continue to check such reports for their credibility in the future.

Corona management – do you still have confidence in Austria’s politics?

Most read
1
Corona Covid forecast: critical mark will be reached on December 1st
2
Corona Numbers on the table: so many corona deaths were vaccinated
3
NewsStreet battle with the police: migrant gang terrorizes Linz
4
CoronaGovernment wants to legally examine further mandatory vaccination
5
PoliticalThe raid protocol on the case in short: Ex-minister in a dressing gown
Tags: CorpsescorridorhospitalinformationrefusedSpecific

Another lockdown in Vienna would cost almost a billion euros!

Erste Bank Open: Around 60,000 fans at the tennis spectacle

EXPLAINED: How will Austria’s Covid rules change in November?