Top Ten: These stocks are going through the roof exponentially

The World’s Most Valuable Corporations: These stocks are going through the roof at an exponential rate

Six companies worldwide are worth more than a trillion dollars. A sound barrier that was even considered a curse for a long time. But size is no longer a problem today, it is what drives incredible growth. A ranking sorts the international corporations not according to turnover or number of employees, but according to the market value. 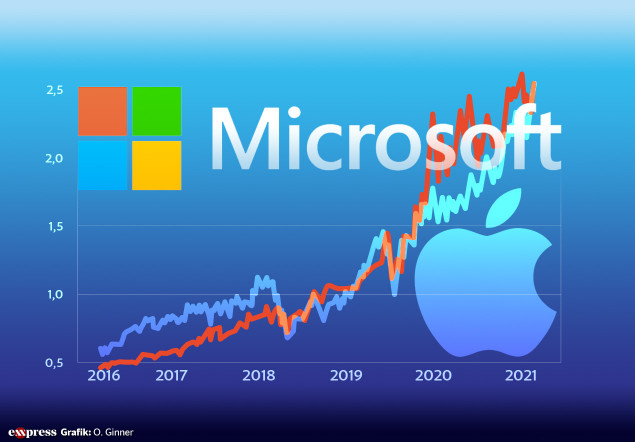 For the first time since June 2020, the number one is no longer Apple, but Microsoft. In the years before that, the iPhone group had surpassed all others in terms of market value. Now, at nearly $ 2.5 trillion, Microsoft is slightly ahead of Apple, which weighs in at $ 2.4 trillion. This means that each of the two companies is worth more on its own than all Dax companies combined.

Apple had already reached the magical mark of a trillion dollar market value in 2018, and Microsoft followed suit a year later. At the time, there were voices that such a high market capitalization could indicate an exaggeration. Companies would hit a wall of growth at the latest with a 13-digit rating, explains “Welt”. The “curse of the trillion” has often been mentioned so far. But it seems clear that there is no such wall of growth. Many of the companies that were worth several hundred million dollars a few years ago are still worth far more today – although this does not necessarily reflect the euphoria of the stock marketers, but above all a rapidly growing business. 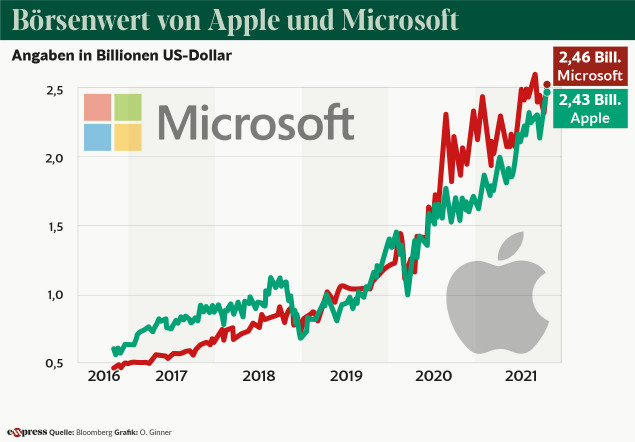 By the way, the only non-American company in the top ten is the Chinese internet giant Tencent. However, the Chinese company with a market capitalization of $ 593 billion seems light years away from the top group. The top ten markets make it unlikely that China will catch up with the United States anytime soon.

Most read
1
NewsHammer shots: fire-fighting planes refuel in the New Danube
2
PoliticalNew details on the crime thriller: Was action against Kurz like the Ibiza coup planned?
3
PoliticalViral Rendi-Wagner video: “How many dead have to die?”
4
PoliticalCampaign against eXXpress – the readers say: “Bravo, that you reveal everything!”
5
PoliticalPact for new elections? Secret talks SPÖ, Greens and NEOS
Tags: exponentiallyroofstockstentop

Briefly speaks out with an attack on political Islam

Sebastian Kurz and his Susanne: The first Christmas party for three!