The oldest ghost story in the world was apparently found on a Babylonian tablet in the British Museum in London. She is 3500 years old. In this picture you can see a shackled ghost. 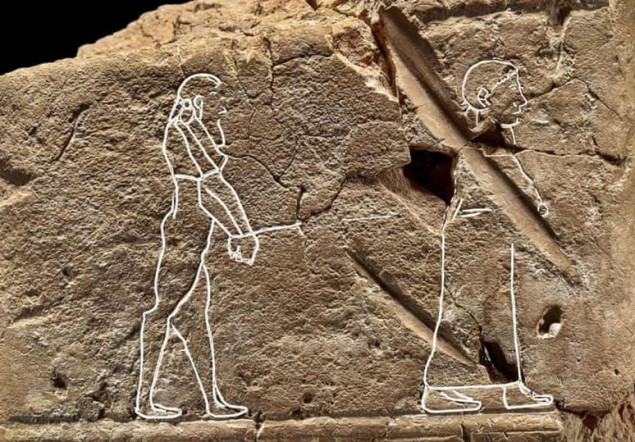 According to the curator of the Middle East Department at the British Museum in London, Dr. Irvin Finkle, it is an “absolutely spectacular object from antiquity.” According to Dr. On the record, Finkle is part of an exorcist’s guide to getting rid of unwanted spirits – represented by a lonely bearded spirit who is led by a lover with his hands tied into the afterlife and eternal happiness.

It’s part of an exorcist’s guide to getting rid of unwanted spirits by addressing the particular malaise that brought them back to the world of the living – in this case, a spirit in dire need of a mate. He walks with his arms outstretched, his wrists tied with a rope that is held by the woman, while an accompanying text describes a ritual that is supposed to send her happily into the underworld.

This plaque has not been on display since the British Museum acquired it in the 19th century. The special thing about it: Only when there is good lighting does the ghostly illustration come to life in a certain angle.

Most read
1
PoliticalCorona uprising by Austrian doctors!
2
CoronaCorona and flu: Are we now threatened with “twilight chemistry”?
3
LifestyleIn the aftermath: Mob attack against “Dancing Star” judge Sarkissova
4
PoliticalThe ÖVP is looking for a plan: “Our problem: we can’t be that dirty”
5
CoronaAccording to our doctors: Now also Corona uprising by Swiss doctors
Tags: ghostOldeststoryworldyears

US government wants to force everyone to vaccinate, otherwise no more goods